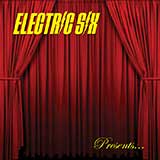 Bitch! Don’t Let Me Die! is the eleventh album by Electric Six, released on October 6th 2015.

Guest back up vocals by Melody Malesh and Nicole Kathleen Jansney.

The album title ‘Don’t Let Me Die’ is mentioned heavily on the track Take Another Shape.

Bass on the album was recorded by guitarist John Nash. Following the departure of Smorgasbord (Keith Thompson), new bassist ‘Rob Lower’ (AKA Matt Thompkins – of the band Mighty Tiny) was later announced as the band’s new bassist however this was after the album was finished.

This album sees the return of the band’s original ‘lightning bolt’ logo which hasn’t been widely used on merchandise since 2005.

‘Bitch! Don’t Let Me Die! is the band’s shortest album to date with a running time of 39:33. However, several other songs were recorded during this sessions and will be included as part of a ‘Bonus EP’ that will be coupled with the upcoming ‘Roulette Starts Of Metro Detroit’ video in 2016.

Continuing a long-running tradition, the songs; ‘Roulette!’ and ‘Electric Six!’ were released early on the band’s ReverbNation page.

‘Big Red Arthur’ was also streamed as an exclusive on freep.com (Detroit Free Press) in promotion for the accompanying ‘I Wanna Lick The Screen’ tour.

‘Two Dollar Two’ & ‘A Variation Of Elaine’ were debuted by Alec de Sausmarez on his radio show at XpressionFM on 29th September 2015.

The ‘I Wanna Lick The Screen’ tour kicked off with a free all-ages show at the DIY Festival in Detroit 25/09/2015.

The songs Roulette! and Dime Dime Penny Dime were debuted live at this show, ahead of the album’s official release.

The band’s first night of the tour performance at the free show at the DIY Festival in Detroit was filmed for possible inclusion as part of the ‘Roulette Stars Of Metro Detroit’ video release in 2016.

The album was available to purchase on tour ahead of the official release date of 6th October 2015.