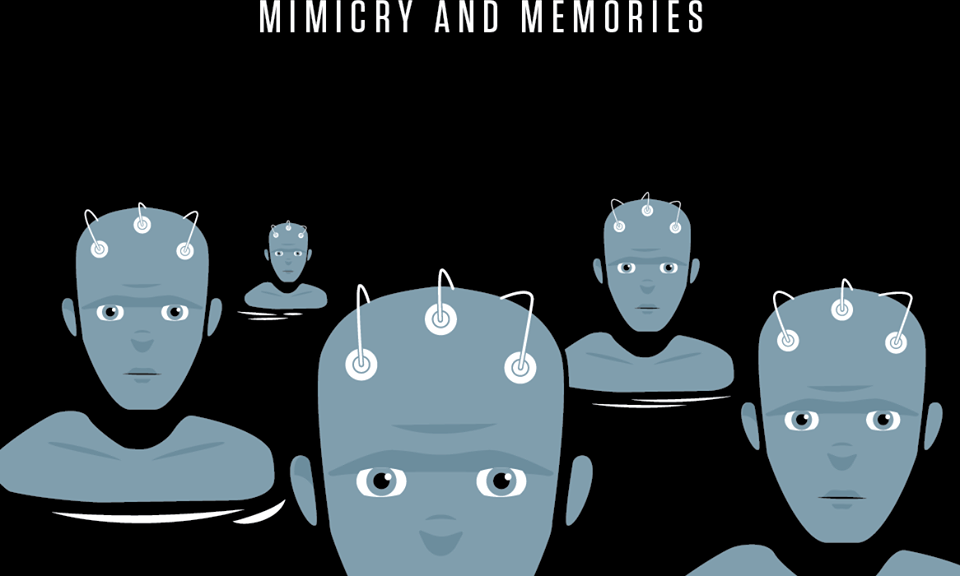 Mimicry And Memories is a two-disc collection of specially selected covers and rarities, released to fans in March 2015. The compilation was funded through the band’s second successful KickStarter campaign in 2014. In response to the great reception for the campaign; raising over double in its intended $30,000 goal, 3 extra cover songs were added – decided on through a poll vote by those who backed the project.

The first disc: ‘Mimicry’, features new recordings of covers specifically chosen by each band member, as well as fan pledges who requested a song of their choosing. The second disc is titled ‘Memories’ and features a mix of unreleased songs, demos and hard-to-find recordings from over the years (In the same style as 2007’s Sexy Trash compilation) The Mimicry tracks were recorded during the album sessions for Human Zoo and this is the last release to feature bassist Smorgasbord (Keith Thompson), who left the band after the band’s ‘Do It For Love’ tour ended in March 2015.

‘Ah! Leah!’ is the signature-song of American Rock musician Donnie Iris and is featured on his album ‘Back On The Streets’ (1980)

‘Cat People’ is a song by David Bowie originally recorded as the theme for the film of the same name, then re-recorded a year later on his album ‘Let’s Dance’ (1983).

‘Do You Love Me? is a song originally by American rock band KISS, featured on their album ‘Destroyer’ (1976).

‘Buckingham Green’ is originally by American ‘experimental rock band’ Ween, featured on their album ‘The Mollusk’ (1997)

‘Everywhere’ is a hit-single by Anglo-American rock band Fleetwood Mac, originally performed by Christine McVie on the album ‘Tango In The Night’ (1987). Electric Six shares vocal duties on their track with Davey Pierce & Nicolas ‘Dobby’ Dobbratz (of Yip Deceiver).

‘The Look’ is originally a ‘break-through single’ for Swedish rock duo Roxette and is featured on their second album ‘Look Sharp!’ (1988)

‘(The) Girls Just Want To Be The Girls’ is a song originally by American rock band Talking Heads, featured on their second album ‘More Songs About Buildings And Food’ (1978)

‘Rockets’ is a song originally by Australian ‘electric cabaret’ artist Tomás Ford, featured on his album ‘An Audience With Tomás Ford’ (2012)

‘Turn Me Loose’ is originally a hit-song by Canadian rock band Loverboy, it’s featured on their debut, self-titled album ‘Loverboy’ (1980)

‘Intro to Exterminate Tour’ – is a remix track that was originally used as the entrance theme for the band’s ‘Exterminate’ tour. It had previously been made available for streaming on the band’s old MySpace page.

‘Dance Epidemic (XFM Session)’ is a live in-the-studio performance on XFM Radio, UK recorded 08/12/2004. ‘Radio Ga Ga’ was also performed but not included on this release. Possibly to do with licensing rights.

‘Typical Sagittarius’ is a demo that was intended to be on Zodiac (and could be where the album gets its ‘theme’ and title) however it was unfinished and later made available through the band’s SoundCloud page. It was made available here physically for the first time.

‘The Shiek Don’t Lie’ is a nod to the band’s manager Christian ‘The Shiek’ Fuller, this track is a demo and features a riff that was later re-used as the basis for the song Be My Dark Angel so can assume the song was written around the sessions for Senor Smoke in 2004.

‘Taxi 2 Nowhere’ is also a demo from the Senor Smoke era, 2004. Although this song was originally performed when the band were called The Wildbunch and can also be heard in its ‘rock’ form on the ‘Live At The Gold Dollar’ album from 1997.

‘Shortlove’ – this is unreleased demo, unclear which sessions it stems from.

‘Night Vision (Demo)’ – Is a guitar/vocals demo for the song that later appears on Switzerland.

‘One’ – is a cover of the Harry Nilsson song, the band had originally submitted it to EA for it’s possible inclusion in an advert for the upcoming video-game ‘Army Of Two’ (2008.) However, heavy metal band Mastodon were chosen instead.

‘I Don’t Speak French (Demo)’ is a song that was created during the sessions for ‘I Shall Exterminate’ and was played by the band live several times on that tour (in between the Stop/Continue’ part of Improper Dancing, however the song never materialised and later was turned into an acoustic ballad on Dick Valentine’s first solo album ‘Destroy The Children’ in 2012.

‘I Can Translate’ – was previously released as digital bonus track on Zodiac through iTunes UK. And later released as a b’side to the tour-only vinyl single for ‘Jam It In The Hole’ available on the Zodiac tour across USA.

‘My Struggle With Heroin’ – is an unreleased demo, it includes several recycled lines notably ‘reach out and grab it’ which are recurring throughout the ‘Exterminate’ album as well as lyrics from ‘Witchy White Women’. Possibly recorded 2007/2008.

‘Free Samples (Demo)’ is a guitar-driven demo of the track that appears on ‘Heartbeats And Brainwaves’.

‘Badass’ is an unreleased demo, it includes lyrics later used in ‘Fabulous People’ and has the same feel as the song, ‘Pulling The Plug On The Party’ from the album Switzerland, possibly recorded 2006/2007.

‘The Warrior’ is a cover originally by Patty Smyth & The Scandal, it’s a demo and was intended for release on Zodiac but wasn’t completed in time, however – lyrics to the song can be seen scribbled throughout the Zodiac booklet.

‘Dancing Like An Idiot’ is Dick Valentine’s demo of The Wildbunch track, later released on Rock Empire in 1999.

‘Technical Difficulties’ is an acoustic, impromptu recording of an idea of a song that never happened. Similar to ‘I’m On A Diet’ which was included on Sexy Trash.

‘Slices Of You (Nash Demo)’ is John Nash’s demo of the song that later appeared on Switzerland.

‘Turn It Up (Nash Demo)’ is John Nash’s demo of a song that grew into ‘I Wish This Song Was Louder’ but is drastically different to the Switzerland version as well as the track ‘Turn It Up’ that appears on Sexy Trash.

‘Strike While The Iron Is Hot! (Nash Demo) is John Nash’s demo of an idea that later turned into ‘Rubber Rocket’ from Switzerland but is drastically different and is also alternate to the track of the same name that appears on Sexy Trash.

The track ‘Ziggy’ was an original song commission pledge (provided with permission from fan, Pat Davis who received it as part of the band’s first KickStarter project to fund the live ‘Absolute Treasure’ live DVD/Bluray.

The last three tracks: Fucking In Another Man’s Clothes, Suitcases & WikiLeaks were recorded for Human Zoo but were left off due to space requirements when the album was pressed to vinyl.

Keith Thompson’s instrumental demos for ‘White Eyes’ and ‘Bleed For The Artist’ were originally listed as part of the album’s tracklist, however, the band had second thoughts when they released that not much different from the album versions and removed them before release. However, as a gesture of goodwill the band made the two tracks available for free download for a limited time via the band’s official SoundCloud page.