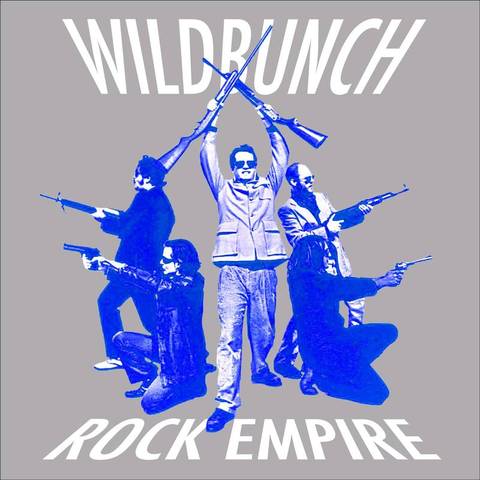 Detroit in the late 1990s was a scary and lawless place. Red lights were taken as a suggestion and gangs ran rampant in the city.

The band that later became the Electric Six got together in 1996 with a shared passion for high energy rock and roll music. Playing for years around local venues The Gold Dollar and The Old Miami, the group started to hit it big when they were forced to change their name to Electric Six after a hip-hop collective, also named The Wildbunch, threatened legal action. Their hit singles “Gay Bar” and “Danger! High Voltage” were two of the biggest hits of the garage rock boom, but the versions included on E6’s ‘Fire‘ album are the most well known.

During The Wildbunch’s existence, they recorded one studio album, Rock Empire. Pressed on vinyl for the first time, and its first release since its local CD-R only release, this deluxe reissue features remastered audio and new inserts that chronicle the entirety of the group’s existence, sure to excite garage rock fans along with fans of the Electric Six, who are still performing to sold out crowds today.

FEATURES:
-Newly remastered audio from the original source DAT tapes!
-Randomly inserted show flyers (Five in all, one in each record! Collect them all!)
-Copy of The Official Wildbunch User Manual (if you know, you know!)
-Digital download in WAV/FLAC format of the entire record plus exclusive remixes!

SIDE A
Don’t Be Afraid of The Robot /Remote Control (Me) / Gay Bar / T.V. / Getting Into The Jam / Take Me To Your Leader / Animal Attraction / Dancing Like An Idiot / Synthesizer

SIDE B
I Am The Knife Naked Pictures (Of Your Mother) / RU Afraid Of The Devil? / I’m On Acid / Computer / Christian Radio Manchester / I Am Detroit / Honolulu / I’m A Demon