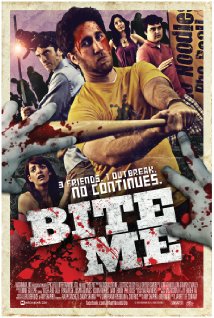 Bite Me is a web series released on December 31, 2010 about three gamers as they find themselves in the midst of a real life zombie outbreak. Relying only on the knowledge and skills they have accrued over years of gaming, these guys will have to drop the controller and pick up anything that they can use as a weapon. For the first season of the show, Machinima partnered with Microsoft and Capcom and accumulated over 14 million viewers. The second season was released on March 6, 2012 and was also aired on the premium cable network for horror, FEARnet.

Three die-hard gamers find themselves in the middle of the zombie apocalypse and realize they have to use their gaming chops to survive, rescue their friends, and ultimately save the world.

The music for the series was done by Fall On Your Sword in conjunction with Tyler Spencer.

A music video was created by TeamHeadKick for the track ‘Zombie Zombie, Skeleton’ as a promotion for the video game ‘Dead Rising 2’ and is available to watch via Youtube

There are 13 songs featured throughout the series:

Back To The Yard With Drac
Teachable Moment
Detroit Sandwich
The Night Makes A Stain
The Eye Your Mother Warned You About
Wild Son Of The Stratosphere
Zombie Zombie, Skeleton
Tonight’s The New Black Hole
Two Kinds Of Monsters
Extreme Demons
Point Of Entry
The Line Dividing Your Fantasy
I Don’t Like To Howl (At Midnight)

Three Gamers. One Outbreak. No Continues. Follow them as they find themselves in the midst of a real-life zombie outbreak.

Business is picking up for the gang and officially interfering with McRuby’s plans. As the General digs in to shut them down, the guys are on the verge of discovering what started it all.