The band have once more asked for thoughts on how much interest there would be for a special edition vinyl box set of album number two onwards. You can see the quote below and click here to see the post and comment.

Crazies…we wish to turn back to a subject first broached late last year, a proposed vinyl box set. We had tremendous response on this page to the idea but now that we have a bit more in the way of tangible information, we want to mention some of the particulars. Some of this has changed a bit since we last spoke on this subject.

We would be offering a 10 album set, running from “Senor Smoke” through to “Mustang.” This would include “Absolute Pleasure” as well as a TBD bonus album (we’re not sure yet what we’ll do with that one but it’ll be something good). It would not include “Human Zoo” because Metropolis is still selling through their copies. Some of these albums would consist of two record sets due to running length. Artwork will be the same as the CD covers for each particular release. The records will be pressed on 150 gram colored vinyl…colors will be varied but each one will be consistent across the set (so, for example, all “Senor Smoke” copies could be royal blue).

The cost of the set will be $250 plus shipping and handling. Now, this is where we need you to really think for a minute. Domestic (US) shipping isn’t any big deal…best as we can tell, it looks like something in the neighborhood of $15 or so. Canada is a little steeper but still double digits in USD costs. Everywhere else is where it gets expensive. While we can’t commit to an exact number because so much of the weight is still in flux (we need to have a specially designed box made to house this set and we don’t yet know exactly how much that will weigh), we have seen enough to believe that international shipments other than Canada will be in the low to mid $100 range It will vary some depending upon destination…Australia is more expensive than the UK, for example), given the weight and dimensions of the package. Assuming we go through with this campaign, you would be given an exact shipping cost to add to your pledge at that time, so there will be specificity but for now, this is a best guess.

So, the bottom line is this isn’t going to be cheap. It won’t be cheap to buy and it won’t be cheap to produce. Our costs and the effort involved is substantial as well, so given that we now know a bit more about what we’d be looking at, we come to you again asking for feedback. Are you interested in something like this, keeping in mind the cost inclusive of shipping and in some instances the potential for customs fees? Again, as in previous campaigns, we are required by law to indicate bona fide value of the contents of a package for customs purposes for international shipments. We’d need to sell a good number of these to make it viable, as you need a certain amount to have economies of scale kick in and get the per unit price to press up a piece of vinyl at a reasonable rate. So, we need to hear from you once again…if we don’t see a good level of interest here, we’ll likely conclude that the concept may just not be viable but please, give us your HONEST feeling as to your interest.

According to a series of posts on the Electric Six Facebook page the vinyl for their latest album ‘Human Zoo’ will only be available to buy online and at selected UK gigs until possibly spring 2015 for the USA due to a shortage of capacity in vinyl pressers that has meant the latest album is to be pressed in the UK.

See below for the full posts.

A public service announcement for all Crazies who have interest in Electric Six vinyl…due to circumstances beyond our or Metropolis Records’ control, we will not have vinyl copies of “Human Zoo” available for purchase during our upcoming September/October dates. The short version of the long story is that there are relatively few vinyl pressing plants left in the world and with resurgent interest in vinyl from consumers, they’re all overworked and thus timelines end up getting extended for everyone. In fact, it’s so bad that “Human Zoo” isn’t even being pressed in the US. However, the good news is that you can pre-order the vinyl at the link below, regardless of where you live on this great big planet, and Metropolis will deliver it unto you. We have been assured that vinyl available via mail order will be ready to ship on the release date (October 14).

We anticipate (contingent upon availability) having vinyl at our US and Canadian shows in the spring of 2015. To head off the inevitable questions from Europeans, no, we do not anticipate having them for sale at European shows, so if you’re interested, your best option is to order via Metropolis.

Crazies of the UK…Electric Six is modifying its message from below regarding vinyl in one key way. Electric Six WILL in fact have a limited amount of vinyl available for sale at its UK shows in November and December. Thank the Worldwide Vinyl Crunch which necessitates production of “Human Zoo” vinyl on your continent.

Music website Storm The Base has uploaded artwork that could be the cover for ‘Human Zoo’, Electric Six’s upcoming album.

It also gives it the code of MET 955 and also sells an orange vinyl, giving the date of release as 7th October 2014.

Finally, it confirms this as the tracklisting: 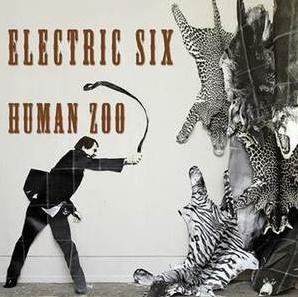