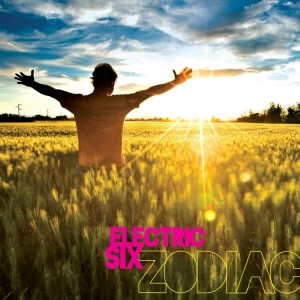 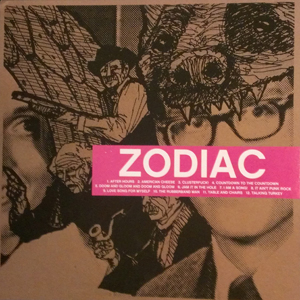 You should by now also understand there are two forces working on your behalf. The only reason you still have a fighting chance are Detroit’s premier over-21 band Electric Six….and the benevolent violence and magnetic gravitational pulses of the stars, planets and moons in the cosmos. For centuries, we humans have taken refuge in the goodness, love and order that rains down on us from the heavens above. For decades we have turned to dangerous drugs to help us travel backwards in time, to sit with the wizards that conceptualized and realized….the Zodiac.

Our bank accounts are sitting at zero. We need to sell another record.

Electric Six realizes this moment in music, this moment in moments. We are naming our record Zodiac, in order to double your chances of survival. We have 12 songs on this record. We have arranged the songs to correspond with the signs of the zodiac in an effort to half-heartedly personalize our connection with you. The songs are almost in alphabetical order. If “Jam It in the Hole” weren’t so amazing and needed to be nearer to the beginning, the tracklisting would be in alphabetical order. Just like if the stars in Capricorn actually resembled a goat, we would take some of this astrology horseshit more seriously.

Zodiac begins in a most hauntingly poppy fashion with “After Hours”, aesthetically borrowing more from the Martin Scorcese film of the same name than with the Velvet Underground song of the same name. Plugging in the names of popular figures like Martin Scorcese and Velvet Underground, along with Justin Bieber, Robert Pattinson, Glenn Beck, Lady GaGa and Thomas Dolby increase the chances of this press release reaching more people via search engines.

Zodiac differs from many of its predecessors in the Electric Six discography. It is largely lower-fi, not necessarily in sound, but in essence. Tracks like “I Am A Song!” and “Table and Chairs” see the band embracing its love of The Poppy Family, Neil Diamond and yes, The fuckin’ Doors.

But Electric Six will always hold the center with equilibrium force. Songs like “Jam It in the Hole”, “Clusterfuck!” and “American Cheese” show you that Electric Six is never done being the band that you want us to be. We are Electric Six. And we must electrify you.

Finally, the band is proud to showcase its first cover song since our 2005 album Senor Smoke. “The Rubberband Man” by The Detroit Spinners, originally released in 1976, might be the catchiest, most upbeat song ever written. Electric Six has long talked about performing this song. And our horoscope told us it was finally time.

To summarize, Electric Six is a force in league with other forces to keep you safe from evil forces. We have a 7th studio album coming out on Sept. 28, 2010 that will be released on Metropolis Records. This record is called Zodiac and it features Electric Six at the height of their musical confidence….at the apex of their musical abilities. At the zenith of everyone up in this here universe tonight. You belong to the city. You belong to the night.