A post on the Electric Six’s official site has confirmed that the new Kickstarter-funded CD is due to dispatch at some point after Wednesday 25th March.

Check it out below! 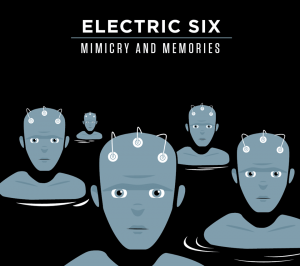 A post on Electric Six’s official Facebook page has confirmed that recording and mixing of the upcoming Kickstarter compilation is complete, with March still pencilled in as the availability date.

See the full quote below.

Crazies…the “Mimcry & Memories” project continues to march toward completion. Recording is done…mixing is completed…mastering is near the finish line. Books have been compiled and ordered. Mixtapes and remixes are in the can. Dinners have been held and private concerts have been performed.

We draw closer to the point we can share all of this with those of you who participated in and supported this project. We’re still looking to be on track for a mailout in March and we’ll keep you posted.

While “Mimicry And Memories” as a completed product is still several months away, we’re happy to announce the final track listing for both discs now. Note that the eventual sequence may not adhere to what’s listed here, but the tracks listing itself is complete.

Electric Six have launched their second Kickstarter campaign, looking to raise $25,000 to create ‘Mimicry And Memories’, a two-disc CD consisting of one disc of covers and one disc of rareties, in the vein of ‘Sexy Trash’.

With a closing date of the 21st July, bonuses for pledgers include the Mustang jacket from the recent album cover; the keys and licence plate to the recently scrapped Electric Six van; and the chance to sign ‘Danger! High Voltage’ with the band. Oh, and a back rub from Dick Valentine.

Over the years, one thing Electric Six has discovered is that the appetite of its fans for more music is unending, unyielding, and insatiable. In interactions with fans, the band is asked most often about two types of potential releases (beyond the yearly album of new material, of course): covers and rarities. Electric Six has enough cover ideas thrown at it by fans to fill up 20 albums, and ever since the release of the rarities compilation “Sexy Trash,” we’ve had people clamoring for more obscurities and unheard gems.

So, we’ve decided to do them both. The purpose of this project is to make real the release of a two disc set (sorry, it’ll be CD-only, no vinyl), to be entitled “Mimicry And Memories.” The “Mimicry” disc will contain 12 covers, 8 of which have been selected by the band, with the remaining 4 cuts hopefully chosen by pledgers as part of this campaign. The “Memories” disc is a successor to “Sexy Trash,” as a collection of outtakes and rarities from the full scope of the band’s career. Included on this disc are THREE songs which were just recorded as part of the sessions for the band’s forthcoming album on Metropolis Records, “Human Zoo.” Thus, the sound quality of songs on this disc will vary from track to track, much as it did on “Sexy Trash.” However, everything on the “Memories” disc is absolutely listenable and enjoyable. As those who own “Sexy Trash” will know, the nature and construction of Electric Six songs often shifts dramatically during the course of development, so demo versions of songs which did make it to albums which are included on this disc are different (sometimes radically so) than the “final” version. For the true Crazy, it’s fascinating to see how the songs develop from embryonic version to their final state.

In keeping with the special nature of this project, these discs will only be available as part of this Kickstarter campaign. We won’t be selling them at shows, they won’t every be available at retail or via mailorder through the band’s webshop, etc.

You can find out more, and pledge, at https://www.kickstarter.com/projects/e6absolutetreasure/mimicry-and-memories

For more information abou what will be on the disc, visit our Mimicry And Memories page.